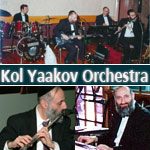 Yaakov Kranz is truly a "one man band" in a most unique and amazing way! He sings, plays the keyboard, the flute, the trumpet and the guitar. With over 25 years of experience, he brings to your simcha not only his instruments and vocals, but his exceptional talents and diverse styles. Whether by himself, or with other musicians (extended one man band), you'll have leibedike music with lots of energy to keep the crowd up on their feet!

We recently hired kol yaakov orchestra for our daughter's vort. He did a great job the music was perfect for ambiance as well as for dancing. I would hire him again for other simchas!

Both my wife and I were extremely pleased with Yaakov Kranz’s music at both of our simchot. The music enhanced the Simchot, without being overwhelmingly loud. It was timely, leibedic and matched the tempo of the parties, dancing music when needed, and soothing background music at other times all - without missing a beat. Most of all, his kind demeanor, professionalism, punctuality, reliability and menshlichkeit were much appreciated. We also loved the flute, it added an elegant touch! My biggest compliment is that I would use Yaakov Kranz (Kol Yaakov Orchestra) again.

Yaakov Kranz has played at 3 of our Simchas. 2 weddings and a bar mitzvah. A pleasure to deal with, above honest. Very professional, always on time. His warmth and joy at your simcha enhances his music. Extremely professional and kind. A real mench. Extremely talanted.

Yaakov Kranz has played at my son's bar mitzvah.Both my wife and I were very pleased with the music as it enhanced the simcha. He was a pleasure to deal with and very reliable. The CD of the simcha that we recieved afterward was a great bonus and enjoyed by the entire family.

My wife and I as well as our machatunim were all thrilled to have the Kol Yaakov Orchestra play at our recent Chasuna. The music was very lively and exciting, which (along with Yaakov’s superb singing), set the stage for very leibedike dancing. We had a large crowd of bachurim from my son's yeshiva and it was really beautiful. I want to give a special Yasher Koach and thanks to Yaakov Kranz. One of the songs used at the chupah was an original composition and Yaakov spent a lot of time arranging the composition just for our Simcha. It was beautifully performed, and very much appreciated. I highly recommend the Kol Yaakov Orchestra.

﻿Stephen and Rachel Hirsch, Dear Yaakov, Thank you for your participation in our recent wedding. My husband and I were very pleased with your thoughtfulness and professionalism. We were so impressed with how many instruments you play. You are very friendly and warm and it came through in your music. We felt that you really did share in our simcha. It was a tough crowd to play to, as our friends come from a diverse Orthodox background. However everyone felt completely comfortable and enjoyed the music, dancing, and singing you provided. It was great how in tune you are to the guests. We will definitely have you at our next big simcha.

Yaakov Kranz, provided lively ruach music for our son’s Bar Mitzvah. He was extremely organized, before, during and after the seudah. We really felt that he had our particular needs in mind, and he added such simcha by combining his tremendous talents and his sincere desire to please us. We are enjoying the Cd’s which were given to us by Yaakov as a memoir, and we are able to relive that beautiful simcha over and over again! Thank you Yaakov, and we look forward to being in touch.

We were so impressed at Yaakov Kranz's playing at a wedding that we contracted with him for our two oldest sons' weddings. Always reachable by phone and email, he made sure that his band could play the music we wanted. His prices are fair and Yaakov is a pleasure to work with. Always professional and musically skilled, we look forward to celebrating more simchas with his personal & musical presence. Don't even think twice - choose Kol Yaakov.

Having KOL YAAKOV was like having an orchestra. We had wanted a flute at our chupah and it was there. Many of our guests commented favorably about the music fitting in so very nicely and not drowning out conversation. The choice of music was beautiful. Could not have been bettter. If we could, we'd award 6 stars.

Great! WE were really truely satisfied with his talanted music and DVD of our son Bar MItzvah. I highly recommend his work.This is the third time we use him and look forwards to use him again.

We hired Yaakov Kranz to play at our son's Bar Mitzva. We were extremely pleased . The music really set the tone as a Yiddishe simcha. The music was lebedik and the singing was excellent.The dancing did not stop. We were so happy with the results we would highly recommend him to everyone. Five stars is not high enough.

The music of Kol Yaakov truly enhanced the sense of simcha at our son's vort. It was pleasant background music throughout the afternoon, but plenty leibidich at the appropriate times.The young(and even some of the "old")folks danced up a storm to his accompaniment. We would surely hire Yaakov again ourselves and highly recommend him to anyone searching for a one man band.

Rabbi Kranz, you have a unique and clear sound that is both everywhere yet unimposing! We appreciated that you took the time to play the few music selections we had requested for Aharon's bar mitzva. Many thanks and Yashar koah!